Blog - Latest News
You are here: Home1 / Sports Turf2 / How To Manage Turf When It Wont Stop Snowing

Virginia has a mild climate and normally winters are warm and mild. In recent history, January and February of 2014 have been abnormally cold and filled with rough weather such as frost, ice, snow, hail, freezing rain, and high winds. While winters do come and go, bad weather will always wreak havoc on turf and cause lasting damage if not treated properly.

So with a rough Virginia winter, what can be done to ensure turf is not only maintained but is usable in a pinch? Commonwealth Sports Turf Services uses several techniques both to protect turf against lasting harm and also to clear turfgrass once the skies have dumped snow on top of high school athletics fields.

One major concern in the winter for turf maintainers is snow mold. When turf is covered by snow, which begins to melt it saturates turf for an extended period and blocks the sun’s rays from drying things out. The three most common snow mold species in the United States include speckled snow mold, gray snow mold and pink snow mold. By nature these three varieties of mold are very different and all require different methods of combat to protect and rid a turf of them. The most common defense and reaction is a specialized blend of fungicides which is designed to combat all three molds. These fungicides are tailor made for each turf and take into account turf health, climate, pH balance, and the major type of mold being fought.

Commonwealth Sports Turf Services performs complex soil analysis to determine the need for such fungicides both as a preventative measure and to block the spread of existing mold. By creating a specific program that evolves and changes as your turf changes, they can be sure that the program causes no damage, discoloration, or harm to your turf.

How To Plow Grass (Or How Not To)

First off, you should never plow grass or turf with a sharp plow blade. It will cause scuffs and permanent damage, and if not done correctly can ruin a section of turf. But there are methods which can be employed to clear turf of snow and ice. Why would this be necessary you ask? During the snowstorm at the end of January, the turf of J.R Tucker High School was blanketed in a heavy layer of snow. There was an international event planned for the following weekend, and the participants had already booked hotels and flights, coming from countries all over the world. As such, J. R. Tucker could not cancel the event. 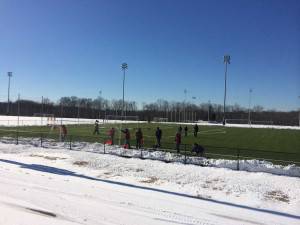 They instead worked with Commonwealth Sports Turf Services to clear the fields of snow. The best method of clearing the snow ended up being manual labor- a bunch of guys out there with shovels being really careful to clear only snow and not turf. Commonwealth also used a tractor to perform a lot of the heavy lifting, though with a protective twist. Commonwealth owner Keith Kitchen constructed a protective cover for a plow blade with a section of PVC pipe, and used it to cover the blade. They then used the tractor and “soft blade” to push the snow off of the field. This got the layer low enough for it to be easily managed by manual labor and plastic snow shovels.

Through a comprehensive turf analysis and season plan, Commonwealth Sports Turf Services can protect your turf from cold, ice, mold, and bad weather. They can also clean and clear your turf in the event that you have an event right after unpredictable Virginia weather lets lose some lasting debris, snow, or ice. If you are interested in any of these services, or want to read more about the services offered, please look at the services.

What is in Store for Turf Management in 2014?