As everyone in the sports turf industry in the area knows, the mid-Atlantic region of the United States has suffered through one of the harshest winters in recent history, with record snowfalls and colder than average temperatures. To add insult to injury, the weather has teased the area with sunny, warm spring day temperatures followed by snowstorms or frigid temperatures, sometimes within a 24-hour period. This means that many Virginia sports turf experts expect specific problems with turf in the coming spring.

According to Elliot Dowling, an agronomist for the Mid-Atlantic region of the USGA Green Section, one of the biggest concerns for those in the sports turf industry turf season is annual bluegrass (poa annua), known as “poa” throughout the turf world. This troublesome winter-annual is a grassy weed that turns a yellow-green color and produces excessive seedhead in the spring. Poa looks lush and attractive in the winter months, but when the weather turns hot, the annual bluegrass dies, leaving large bare spots and thousands of seeds ready to sprout in the fall. The best option for treating annual bluegrass is by applying pre-emergent in the fall, normally in mid-September. Pre-emergents that help control crabgrass can also control poa. For those that discover annual bluegrass in the winter or early spring, using imazaquin is recommended on all grasses except fescue. In dormant Bermuda grass, it is possible to spray poa with glyphosate, but it is critical that the Bermuda grass be truly dormant before spraying. One old trick for protecting Bermuda grass while eliminating poa is to wrap an old towel that has been dampened with diluted glyphosate around a rake, then, using the rake like a paintbrush, apply the chemical to the poa.

Many golf superintendents are concerned about winter kill under the several inches of snow that many areas of the mid-Atlantic are still dealing with. Susceptible grasses such as Bermuda grass and perennial ryegrass may suffer significantly from the excessive snowfall in the region. The snow also makes it difficult for evaluation of the grasses on courses as frozen ground makes it difficult to remove turf plugs. One suggestion is to remove turf plugs from sensitive areas during warm weather periods in order to assess winter kill. There are conflicting recommendations regarding the removal of snow from greens, as snow can provide a layer of insulation should another cold period develop. However, snow and ice can also deprive some grasses of oxygen, leading to additional winter kill. It is suggested that if superintendents remove snow or ice from greens, that there are enough channels for surface water to exit the affected area. Water that is allowed to accumulate and refreeze could lead to even more winter freeze issues.

In some areas of Virginia and other mid-Atlantic states, temperatures have fluctuated significantly fromd day-to-day. Warm air ahead of some of the cold fronts melted much of the snow cover that could have provided insulation against the cold temperatures that followed. In addition, the duration of cold weather has a significant impact in the sports turf industry, even though soil temperatures are more important to the health of grass than air temperatures. Soil helps buffer rapid temperature changes for short periods, although saturated soil conditions can cause some concern when the temperatures drop due to ice formation. 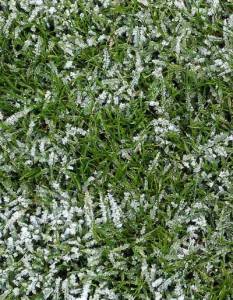 Many superintendents are concerned about crown hydration injury, which occurs when warmer temperatures cause the plant cells to rehydrate. If the temperatures suddenly drop again, as they have throughout this winter, ice crystals can form in the crown of the plant, causing the rupture of cells and the death of the plant. Crown hydration often occurs in late winter or early spring when the winter hardiness of the turf has been lost. Annual bluegrass and fairways are the most susceptible to injury from crown hydration. Because the temperature has gone from as high as 70 degrees one day, down to 30 or below the next day in some areas of Virginia, there is a significant risk of crown hydration for almost all types of turf grass. One type of sports turf that is less likely to suffer from crown hydration is creeping bentgrass as it remains dormant longer than other types of turf and does not begin taking up water until later in the spring.

In areas where there has been little snow cover, but historically low temperatures and high winds, there is some concern of winter desiccation. Wind freezes the leaves of plants, and the freezing can cause severe injury or plant death. Covers can help prevent desiccation as they reduce the loss of moisture. Desiccation injury is more likely on raised or exposed sites where surface runoff is greater.

The mid-Atlantic region, which includes Virginia, Delaware, Maryland, West Virginia and Pennsylvania have suffered a much harsher winter this year than they have in the past. This is leading many sports turf industry experts to express concern regarding the health of the grasses used on golf courses and other playing fields. For more information, visit Commonwealth Sports Turf online, or contact us by phone today to take advantage of more than 31 years of experience in sports turf management.

How To Manage Turf When It Wont Stop Snowing

Winning the War on Weeds