Since the practice of sodding using natural sea grass turf was first pioneered in Scotland for early 17th century bowling greens, natural grass has continued to be the natural choice of professionals creating sports pitches. However, maintaining those flat, green lawns over 200 years ago was extremely labor intensive, especially before Edwin B. Budding invented the lawn mower in 1830. Green keepers in Scotland then, pioneered methods of maintaining their grass and by the time the first 18 hole golf course was designed in the 18th century, the evolution of turf grass had already begun.

From the basic necessity of sodding, practiced in Scotland from 1663, grounds men had developed a method of harvesting seaside salt marsh sites where salt-tolerant bent grasses, growing in fine silt soils, could be easily cut and lifted manually with their turfing irons. They also developed the method of rolling, and used heavy stones carved for the purpose. as well as the practices of sand patching and manuring to provide nutrients to stimulate growth and recovery.

Natural Biological Mowers of the Grass On The Greens

Sheep and rabbits were the biological mowers of the grass on the greens, golf courses, and upper class playing fields at that time. Green keepers had to sweep the grass before play. After horse drawn and manual mowers, the development of the motorized multi gang, reel, tractor mower was a welcome technological advancement.

By the 19th century sports, including lawn tennis and rugby, baseball and American football were being played across Europe, the United States and in the wider world. This led to the emergence of new lawn care industries for the more commonly used pitches and sports fields, and to the further study of turf grass seeds.

More intensive use of playing fields and pitches created some problems with soil compaction and this led to the practice of graping, or forking, manually to prevent impaired internal soil drainage. In Scotland, root zones evolved to improve bowling green drainage. 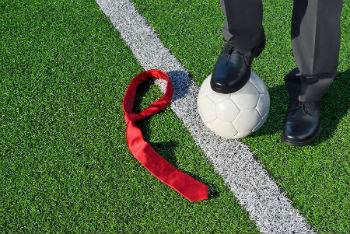 The vastly growing leisure and sports business and the new 40 hour week, inspired more hard working Americans to enjoy their 20th century sports pursuits including country clubs, and golf courses. Post war suburban residencies with their neat lawned gardens kindled interest in the care and maintenance of grass and the lawn-care industry began to boom.

Related industries, like seed suppliers, quickly saw the opportunities that the sports and leisure businesses provided, and they began to invest in the scientific study and development of grass seeds suitable for specific environments, soils, and pitch purposes. Twenty first century grass service providers, have also advanced the evolution of turf grass. Their understanding of the world’s soils, seeds, and its atmosphere, has led them to provide services that benefit both industry and the planet.

New seed developments, such as enhanced grass seed coatings that comprise of blends of nutrients for healthy root development and quick germination, has advanced this evolution further. Getting the right seeds for the right soils and environment is vital and that’s why innovative companies in Virginia, like Commonwealth Sports Turf, who are masters of turf maintenance, should be brought in at the planning stage of any new sports surface plans – for their specialist knowledge of soils, drainage, and agronomy.

Grass is vital for the process of removing carbon from the atmosphere and depositing it in the soil reservoir. Every year, turf grass sequesters more carbon into soils than woodlands. Through the evolution of turf grass, our understanding of how beneficial to the planet grass is has evolved.

The Science and Art of Turfgrass Culture