Although many fans take the grass that covers athletic fields for granted, many do notice some of the features that are part of athletic turf that do not appear in other types of ground cover. Because of the additional wear and tear that athletic fields undergo, special attention is required to be sure that the ground cover remains safe for players while still looking attractive to the fans.

There are different types of athletic turf, and fans often discuss the turf as a factor in how a game is played. Most high school and college fields are natural soil fields, while some schools have moved to artificial turf. Fans often talk about the risk of injury on natural turf as opposed to artificial turf, and there are studies available that contradict each other on which type of turf is safer. In addition, each sport requires a different type of turf. In golf, grass is an important factor in how the game is played. The shoes worn by the athletes in different sports also change, depending on the type of turf. Fans notice turf most in sports when they talk about how a player may do during the game when they are on a field that is different than their home field, such as a player whose team has a natural turf field playing on an artificial turf field. 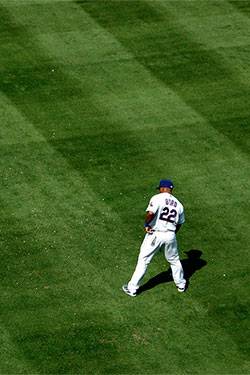 One of the things fans notice on athletic field is the mowing pattern many major league ground crews have implemented during games. Fans notice turf that is trimmed into interesting, unusual patterns, although even the straight, grid lines seen most often during games is still noticeable. What many fans do not know is that those patterns require a significant amount of pre-planning. Soil tests are necessary to determine how healthy the grass is, and maintenance crews must maintain the proper chemical balance in order to promote the cutting designs chosen. Some experts say that changing mowing patterns helps prevent problems associated with weak turf, and that the designs provide a better ball bounce than a traditional mowing pattern. However, fans are often unaware of these factors when they visit a stadium with fancy shapes, lines and patterns on the field. They simply marvel at the attractiveness of the grass with no understanding of how much work goes into creating even the simplest grid pattern.

In any sport, the turf has a bearing on how the ball in the game reacts when it hits. A new turf installed at Ford Field where the Detroit Lions play consisted of sand, green plastic fibers and crumbled rubber pellets that resembled BBs. The tiny pellets appeared as dust each time the ball bounced on it, and players said that when their faces were close to the ground, the pellet dust was slightly annoying. Fans could see the small pellet dust cloud each time the ball or a player hit the ground. Fans notice turf changes the play calls made during some sports as the coach makes allowances for the differing types of turf the players encounter. In baseball, a ball bounce can affect the outcome of a play, so players must adjust to the type of turf on the field, which players will notice, even if they are unaware that the adjustment was made due to the playing field surface.

Whether an athletic field is covered in artificial or natural grass, fans notice turf more than many field maintenance crews realize. A field that is not maintained, with patches, holes and brown spots, will be noticed very quickly by fans when they enter the stadium, and few want excuses as to weather or other natural factors that can affect athletic fields. Players also notice the potential injury facing players on both natural and artificial turf, yet research indicates that both have injury pros and cons. Mowing pattern often draws the attention of fans, yet few fans realize mowing patterns are also a form of turf maintenance as changing mowing directions keeps grass healthy and promotes a better playing surface. One important thing that fan notice turf for is the changes to the game that occur based on the ground cover of the field. Balls bounce differently on various surfaces, while players land differently on natural vs. artificial turf. All of these factors are important when choosing the right turf for the field, as ground crews not only want to provide the safest, most durable turf for the players, but want the fans to be proud of the field as well.

Interested in learning more about how we manage our turf? Check out some other blog posts!

The Truth About Turf During a Hard Freeze